If you’ve considered hedging your portfolio against rising rates, now might be a great time to start. The best time to hedge is when the thought of such an event seems so unlikely. That sentiment is certainly prevalent now with global interest rates at all-time lows and over $10 trillion of debt with negative yields. It’s becoming more and more evident that there is a dangerous bond bubble forming. Global Developed Market Yields recently hit 0.629%, an all-time low.1

Betting on U.S. long bonds is now a dangerously crowded trade, as U.S. Treasuries are one of the few global destinations with positive yields. ‘Bond bubble’ may be an overused term, but that doesn’t make its potential any less dangerous. The economic recovery should be viewed with great skepticism.

When the $200 trillion of global debt and unfunded liabilities starts to deflate, the fallout will be severe.

There are plenty of yield hungry investors lobbying for higher interest rates. They are both individual (often risk-averse retirees on fixed budgets) as well as institutional investors (banks who want to increase their net interest margins; pension funds and insurance companies who need higher rates to match future liabilities). But these groups should be careful what they wish for because unintended consequences are sure to follow when, not if, rates begin rising in earnest.

With over one quadrillion dollars in worldwide liabilities (including derivatives, much of which is tied to LIBOR) the risk of rising interest rates is catastrophic. Even if this number is somewhat overstated by it’s notional value, the risk/reward profile for bonds, at current yields and existing debt levels is terrible.

The simplest defense against the bond bubble is to raise cash before it starts. If you wait too long you may lose that option. During the next financial crisis, investors may experience major illiquidity trying to sell bonds, especially high-yield ETFs.

There is a real possibility that these funds could be frozen or halted from trading for an extended period of time. We saw a preview of this in August of 2015 when a few, over-concentrated ETFs (XLF, QQQ, etc.) gapped lower at the open of trading as ETF market makers walked away from their bids when they couldn’t get prices for the ETF’s underlying holdings, halted by circuit breakers. And the illiquidity in junk bond funds is much worse than this example and might be the most susceptible portion to the bond bubble.

The durations of bond portfolios are also at their highest level ever. This means that bond investments (especially ETFs since the bonds won’t technically mature) have never been more sensitive (vulnerable) to rising interest rates. Given the current low yields, very small rate increases, sometimes as little as a few basis points (in the case of some foreign debt) can wipe out a year’s worth of yield. Investors may soon realize the token ‘international bond’ fund included in their 401(k) account is part of a bond bubble ready to pop.

With this in mind, consider rotating out of longer maturities and into U.S. Treasury bills. With their extremely short durations, as short-term rates rise investors benefit from continuously rolling them into newer, higher yielding T-bills. Another option is the exchange traded fund, ‘BIL’ which is an ETF that aims to track the price and yield of the Barclays 1-3 Year T-Bill Index.3

Even if you can go to cash or hedge with an alternative or inverse ETF, you may still be indirectly exposed to a deflating bond bubble. Perhaps you are one of the millions of Americans that depend on current or future pension payments for a secure retirement. Or maybe you have an insurance product that supports you in some manner, like an annuity or life insurance policy.

Because of the investment policy of these institutions, their ability to reduce risk becomes a conflict of interest. They’re about liability-driven investing, not principal protection. We highlight pension funds and insurance companies because they are some of the largest holders of various types of debt. Like everyone else, these institutions have been forced way out on the risk curve by low interest rates. If these investments sour, their ability to deliver promised benefits should be severely compromised.

Pensions have required rates of return they must try and meet because of promised pension benefits, some which are legally bound. For a variety of reasons, most pensions are currently experiencing funding gaps and shortfalls. Don’t think that the Pension Benefit Guaranty Corporation (PBGC) has the resources to protect all pension plans. The PBGC is likely to become bankrupt itself and could very well be the next bailout candidate itself.4 When deflation kicks in for both the bond and stock markets, only a fraction of the current $34.5 trillion on global pension funds will remain and pensioners will be left crying, “but they promised”!5

These institutions’ required rates of return are liability-driven, and they have to invest to match their promised benefits. The WSJ wrote about pension’s high, and increasing, allocation to equities to close existing funding gaps. These allocations are coming at historically high market valuations. For most pension funds, when interest rates on investment grade corporates eventually do rise to approximately 7.5%, they can more closely match their targeted rate of return. At that point, you could see pension funds drastically reduce their allocations to equities as they ramp down their fund’s risk profile. With over $34 trillion in pension funds worldwide (about a quarter invested in equities) if pension funds sell their equity positions, it could get quite ugly for global markets. Making matters worse, pensions are dumping market-lagging alternative investments (like hedge funds) just before they’ll need the risk-reducing strategies the most, at market tops.

Insurance companies are giant portfolios of debt, so the insurer backing your life insurance policy or annuity may not be as safe as you think. Outside of the risks associated in the aforementioned global debt (junk bonds, negative yielding sovereigns, etc.) insurers are the end buyers of asset backed securities. The ABS market could be the next shoe to drop as the major ‘assets’ backing them (student debt, subprime auto loans, commercial MBS, credit card debt, etc.) have already started deflating. While it is true that insurance companies are regulated at the state level, in a deflationary depression it’s doubtful they could backstop all the policies if multiple insurers become stressed. If you are concerned about your insurer’s financial stability or you need to raise cash for expenses, you might consider selling your annuity or life insurance policy.

We also believe it’s a timely junction to hedge some of your equity portfolio, with major U.S. averages within 1% of all-time highs and market valuations in the stratosphere. Many higher-yielding stocks are ‘bond equivalents’ and should sell-off hard with rising interest rates (these include utilities, REITs, financials and MLPs).

With borrowing costs so low, corporations have issued a tsunami of new debt (roughly $3 trillion) since the pre-crisis levels in 2007. For corporations, it’s clearly cheaper to issue debt than equity (the after-tax borrowing cost for many corporations is 2-3%). This is due to investor’s insatiable demand for yield. Consequently, money managers just reported their highest allocations to corporate bonds ever, 36.1%.6 But when the ‘cost of capital imbalance’ changes after a sustained rate increase (i.e. when it becomes cheaper to issue equity instead of debt) you could see an avalanche of follow-on equity offerings which will ravage equity prices through dilution. All the shares that have been repurchased by corporations over the last few years could come flooding back to the markets.

There are a several bond inverse ETFs that may help investors survive the inevitable deflation of the largest bond bubble in history. One example is TBF, a U.S. Treasury bond inverse ETF. We like TBF because it targets the longest maturities of Treasury bonds, 20 years and higher, which should sell-off the hardest in a rate rise due to their duration. Investment grade and junk bonds also have inverse ETFs that can be used to hedge against, or speculate on, higher interest rates. There are also various alternative ETFs that maintain investments in bonds while simultaneously hedging interest rate risk by shorting comparable U.S. treasury bonds. Please review our complete list of inverse ETFs that may help hedge exposure to various sectors. 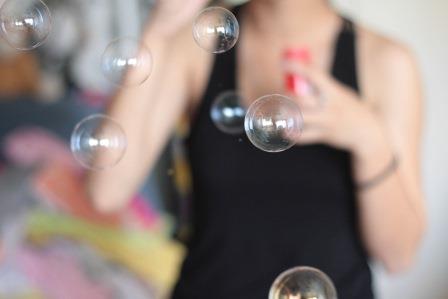